For years, when it comes to affordable phones, products from top brands may come to our minds first. But it does not mean that they are the best value for money. Today we have chosen two of the smartphones from Xiaomi and Blackview respectively for comparison.

We found that Redmi 10X 4G and Blackview A100 share similar features in some respects. For example, both of them come with 6GB RAM, 128GB ROM, slim profile, light weight and cost roughly $200 or less. 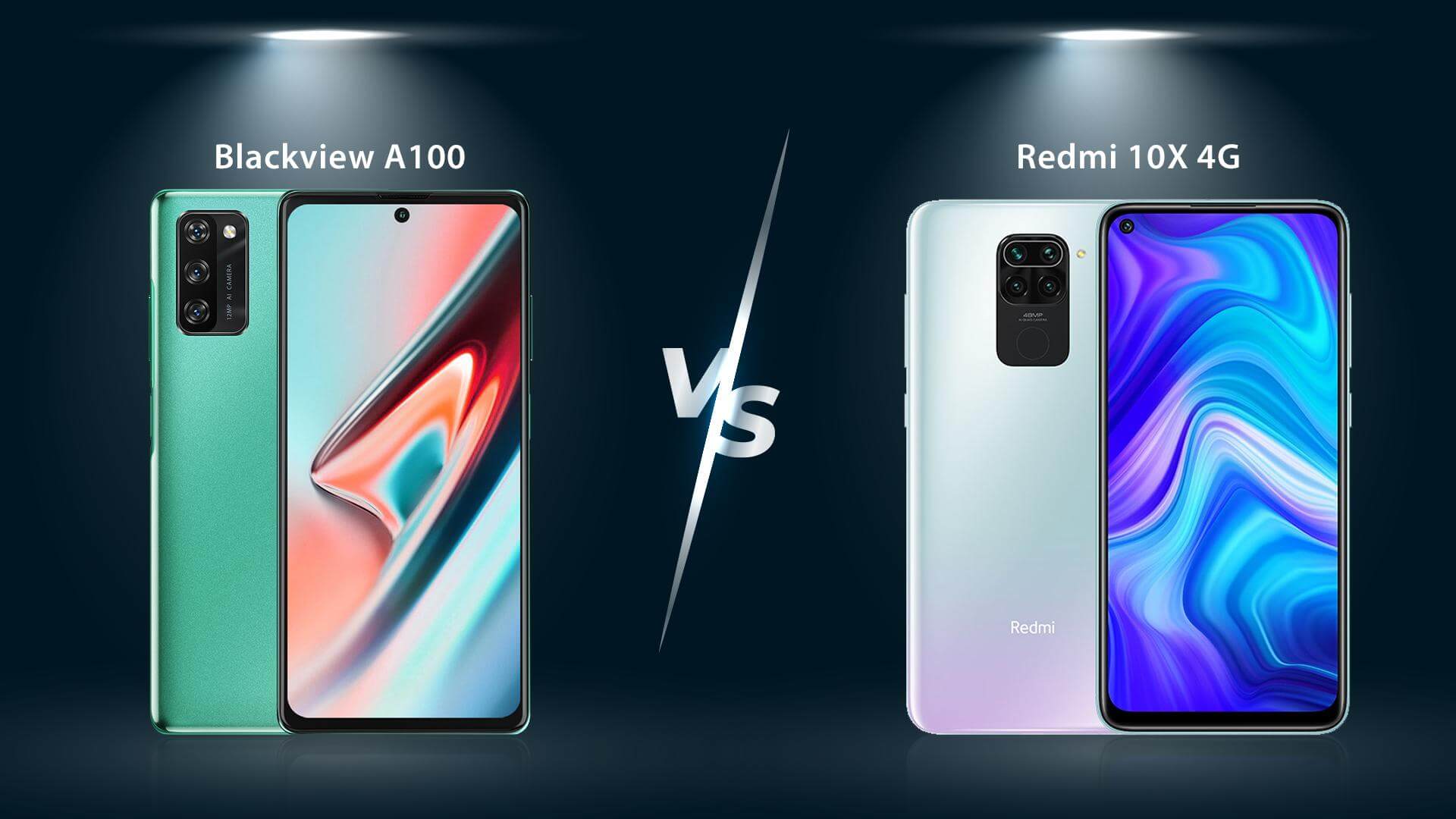 However, when we go further, it turns out they are very different from each other. Actually, in many respects, the relatively less famous Blackview A100 performs better. In the following contents, we’ll try to compare Blackview A100 with Redmi 10X 4G in detail.

A major difference between Blackview A100 and Redmi 10X 4G is the autofocus ability. Whether you are an amateur or a professional photographer, a good autofocus technology is critical to a successful shoot by expanding shooting possibilities.

Blackview A100 boasts Dual Pixel AF, and Redmi 10X 4G features PDAF (Phase Detection Autofocus). Briefly, Dual Pixel AF is an extension of PDAF, delivering a greater ability to maintain focus on fast-moving objects. Therefore, in most cases, whether the subject is moving or you’re moving, Dual Pixel AF allows you to capture every split second while maintaining uncompromising quality.

Another factor in autofocus is the VCM ((Voice Coil Motor) system. Unlike Redmi 10X 4G, Blackview A100 is equipped with the closed-loop VCM. In fact, many mobile cameras use the open-loop VCM system, which will have to recalculate and correct the autofocus if any motion happens while taking a picture, consuming more time than closed-loop VCM. By contrast, closed-loop VCM adopt a more optimized design to deliver a much faster focusing speed and shake compensation. 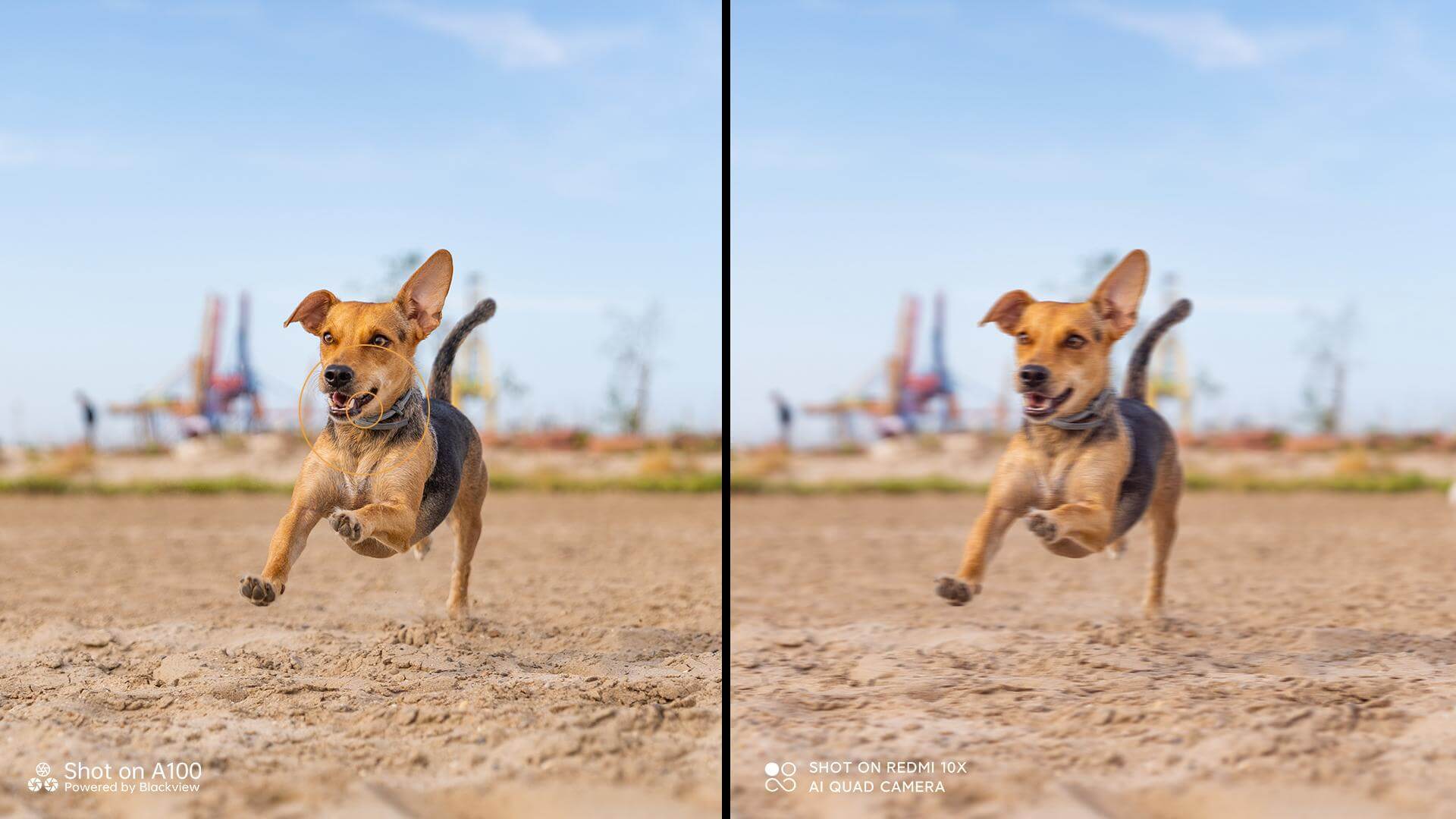 By combining the Dual Pixel AF and the closed-loop VCM, Blackview A100 focuses as fast as 0.03 seconds and has a faster continuous shooting speed of 10 frames per second, nearly triple the average in its class. This is particularly useful for capturing action sequences, such as skateboarding, dancing and more. Blackview A100 also can be used to capture your spirited pets and every wonderful moment in your life.

It is too early to jump to conclusions about which phone has better cameras by just comparing megapixel features. For example, iPhone 12 comes with relatively low-megapixel cameras, but delivers great image quality. That also goes for A100, who has the same camera capability as iPhone 12.

In fact, according to the public information, the GM1 in this Redmi phone is a 48MP image sensor but with 12Mp output, and its pixel size is 0.8µm. GM1 with tetrapixel technology mimics big pixels to take brighter pictures by adopting Quad Bayer pixel arrangement, which can combine four 0.8μm pixels into one by four-in-one pixel technology. 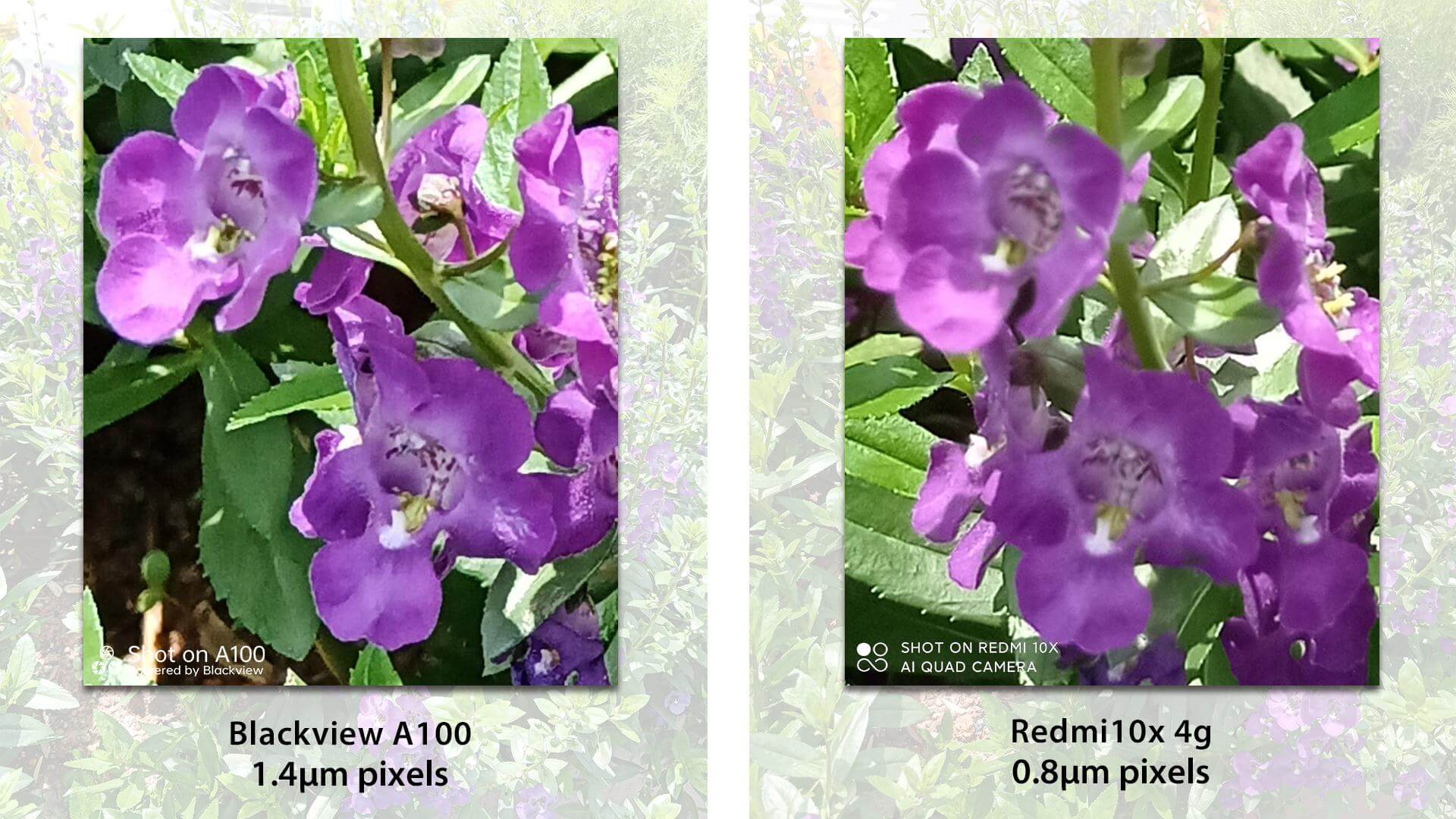 By contrast, Blackview A100 with Sony IMX362 sensor features actual 1.4µm large pixels, which absorb more light and information about that light than smaller pixels to deliver pictures with more accuracy and fine details.

Besides, in order to bring more clarity to your photos and videos, Blackview A100 supports HDR. It is not a simple task for a phone to perform well in both photography and videography. Blackview A100’s HDR works not only with photos but also works with videos. This is a great feature that most affordable phones do not support. 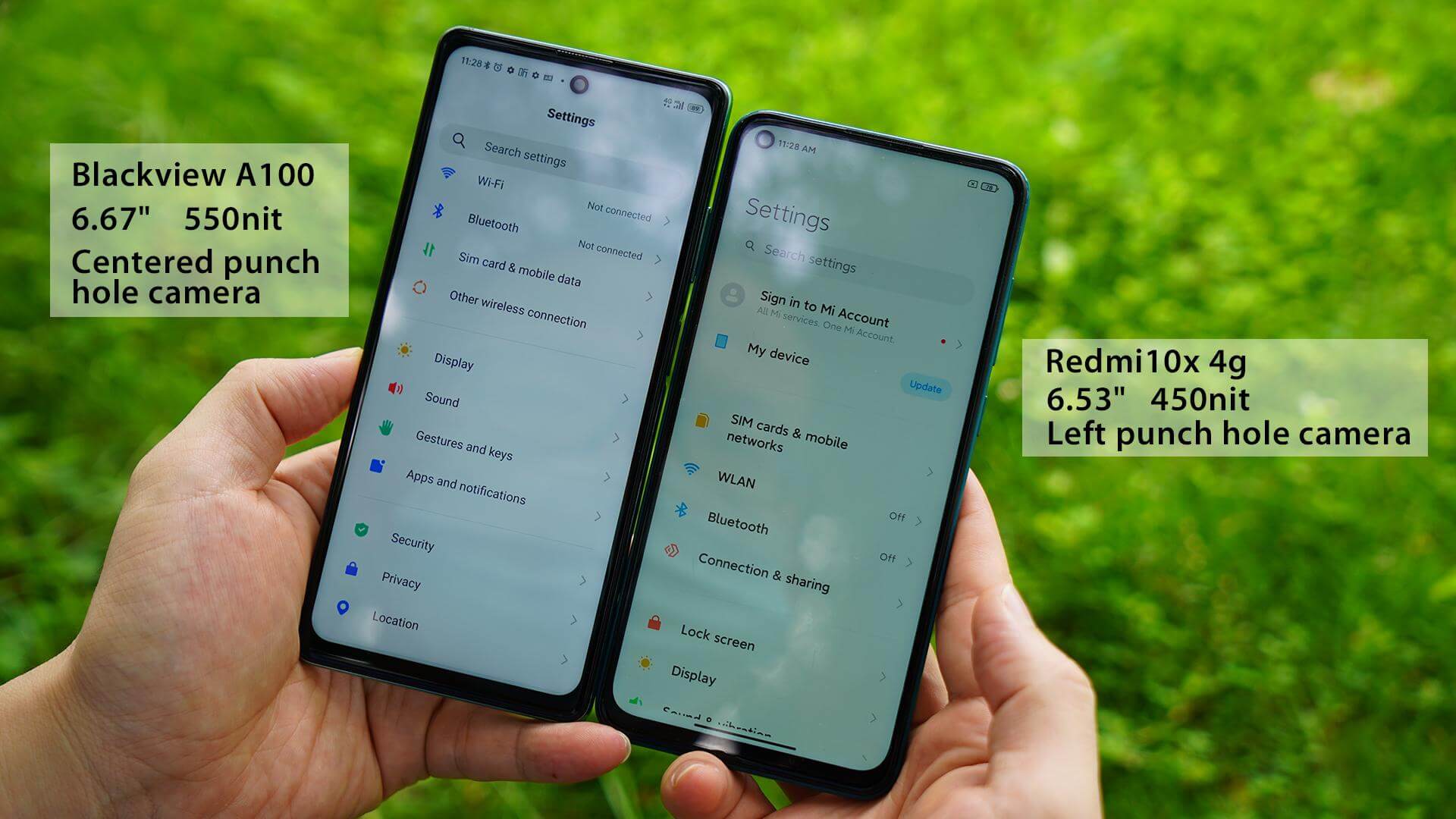 Besides, unlike most of the affordable phones, Blackview A100 shares the same design with Samsung’s Infinity-O display. With a tiny punch hole centered at the top, this phone interprets the beauty of symmetry, perfect for perfectionists. 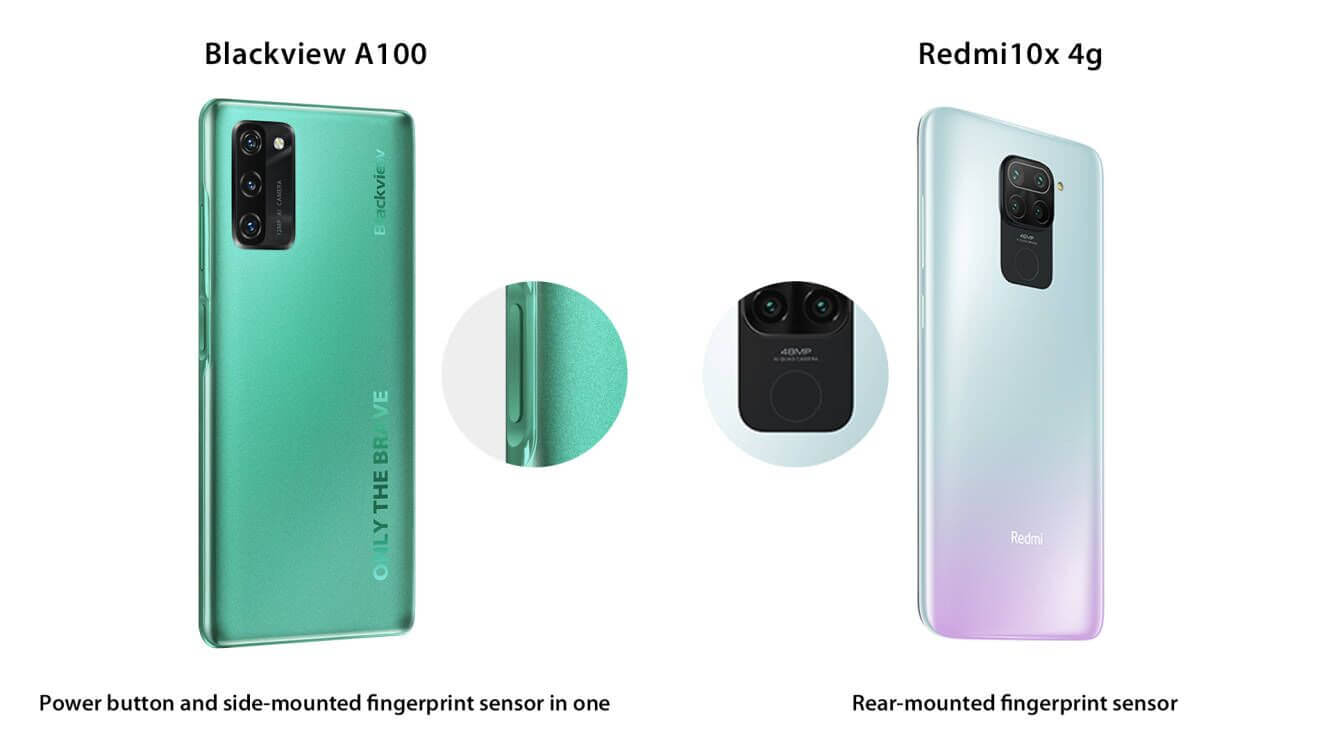 You will find Blackview A100 sitting naturally underneath your thumb while you are using this device, and it is easy to instinctively feel out without having to look at the phone. Furthermore, Blackview A100 combines the side-mounted sensor and power button in one, which means you can start and unlock it in a seamless motion.

As for the rear-mounted sensor, it has to be placed close together with rear cameras, so it becomes easy to confuse them when feeling with your finger. In fact, many affordable phones do not come with the side-mounted fingerprint sensor due to its higher cost.

To some extent, the side-mounted fingerprint sensor and the symmetrical display design shows the beauty of simplicity. And in order to take the beauty to a new level, Blackview A100’s back cover adopts similar technology with Oppo’s crystal diamond processing, making it glow like a million stars. And unlike Redmi 10X 4G, Blackview A100’s back cover is silky and fingerprint-proof to touch.

Generally, Blackview A100 outperforms some so-called best performers in many respects. It feels a generation ahead by combining powerful cameras with attractive and practical design. Significantly, Blackview A100 is now available at only $139.99, undercutting its competitors a lot. 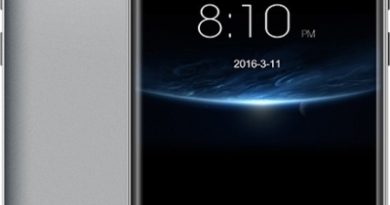 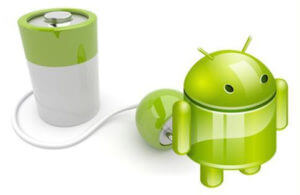 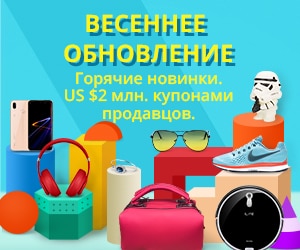